(Dear Muslim Friends, you are always welcome to read every post I make on this blog – it is primarily for you! So. . .read on if you like, but this post is specifically directed to my “Christian” friends who may not agree with or understand my last post.)

Some of you may be confused about my last blog post (Am I Trying To Convert Muslims Into “Christians”?). Maybe I can clarify a little bit here.

Let me explain before you think me a heretic! I realize that “Christian” is a Biblical word and thus an important word but. . .it is only used 3 times in the entire New Testament (Acts 11:26, Acts 26:28, and I Peter 4:16). Because it is a word used in the Bible, maybe we need to simply define it or redefine it. However. . .

It is my firm opinion that redefining the word “Christian” is a very, very daunting task. Why? Because so many Muslims in the world today equate the word “Christian” with a lot of things that would shock and dismay us. In their minds, some Muslims still equate modern day “Christianity” with the atrocities of the Crusades. Some link “Christianity” to the U.S. military incursions into Iraq and Afghanistan (which many see as “Christianity” attacking Islam) or the killing of Osama bin Laden. Some equate “Christian” with “America” or the West.They think America is a “Christian” nation (my wife and I run into this all the time in the Middle East). They see Hollywood movies and even link “Christianity” to what they see there – violence, immorality, abortion, divorce, drunkenness, drug useage, swearing, lack of care or honor for the elderly, on and on.

If you were a Muslim, wouldn’t you ask the questions, “Is that ‘Christianity’?” “Are those people ‘Christians’?”

Just from these few examples of real misunderstandings (and there are more), can you see how the word “Christianity” is not a positive word in the minds of so many Muslims? Can you see how we need to strive to learn how each other thinks about words? 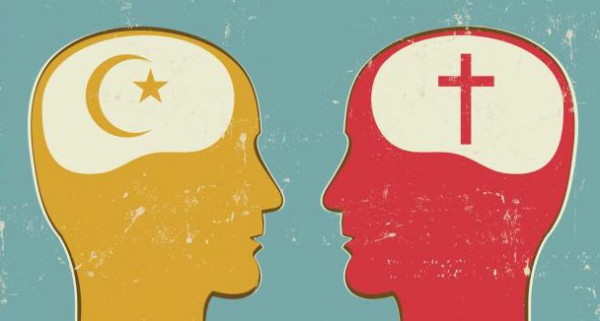 Because of these misunderstandings, I prefer not to use or promote the words “Christian” or “Christianity” with my dear Muslim friends.

I promote JESUS. I promote FOLLOWING Jesus. I promote being his DISCIPLE.This is what I believe he wanted.

Depending upon which translation you use, the word “disciple” is used in the New Testament between 230 and 260 times – obviously far more than the word “Christian”!

I share with my Muslim friends that Jesus is calling all of us (no matter what religious label you go by) to be his disciples – to follow him.

Following Jesus means we are willing to: do anything for him, say anything for him, go anywhere for him, suffer any loss for him. To be completely, unreservedly, devoted, dedicated followers of his. To give him undivided allegiance as our savior and our king.

Our Muslim friends are absolutely right when they point out that the Bible does not specifically say that “Christianity is the true religion.” What it does say over and over and over however, is that JESUS is the true path – the bridge – to heaven. Jesus himself said he was the way, the truth, and the life. That no one could come to God except through him (The Gospel of John 14:6). That is what we should promote. Better yet, that is who we should promote!

So I promote being a disciple – a follower – of Jesus. If I must have a label to describe my faith, that is what I prefer.

Finally, let me say that no “religion” or religious rules can cleanse a person’s heart or change them from the inside out. No “religion” can take away all their sins or free them from their fear of the Day of Judgment and Hell.

But someone can. Jesus can.

Trusting in Jesus’ sacrifice can make a person clean on the inside.

And that is why I don’t promote “Christianity.”