The First Christmas: The Bible & The Qur’an Both Say His Name Will Be Called “Jesus.” Why?

The First Christmas: The Bible & The Qur’an Both Say His Name Will Be Called “Jesus.” Why?

Each Christmas, many of my Muslim friends wish me a “Merry Christmas!” It means a lot to me – just as they say they appreciate my well wishes for them at Eid or Ramadan.

Tonight – Christmas Eve – I can’t help but think of the first Christmas. . .and the truly amazing angelic announcement about the coming of the Messiah some time before that.

When the angel announced to the virgin Mary the unbelievable news that she would have a son, both the Bible and the Qur’an say his name would be called. . .

The Qur’an 3:45 Sahih International
[And mention] when the angels said, “O Mary, indeed Allah gives you good tidings of a word from Him, whose name will be the Messiah, Jesus, the son of Mary – distinguished in this world and the Hereafter and among those brought near [to Allah].

The Gospel According To Matthew in the Injeel, 1:18-21
This is how the birth of Jesus the Messiah came about: His mother Mary was pledged to be married to Joseph, but before they came together, she was found to be pregnant through the Holy Spirit. Because Joseph her husband was faithful to the law, and yet did not want to expose her to public disgrace, he had in mind to divorce her quietly.

But after he had considered this, an angel of the Lord appeared to him in a dream and said, “Joseph son of David, do not be afraid to take Mary home as your wife, because what is conceived in her is from the Holy Spirit. She will give birth to a son, and you are to give him the name Jesus, because he will save his people from their sins.”

The Gospel According To Luke in the Injeel, 1:30-31
The angel said to her, “Do not be afraid, Mary; for you have found favor with God. “And behold, you will conceive in your womb and bear a son, and you shall name Him Jesus.”

Surely God did not choose the name “Jesus” randomly but instead it must have been purposeful. So. . .why do you think God chose this particular name?

Of course, I cannot speak for you, my Muslim friends. But I can share with you the Biblical viewpoint.

It is because of the meaning of the name. The word “Jesus” means, “The Lord is salvation” or “Savior.”

When you think about Jesus, do you see what I see? 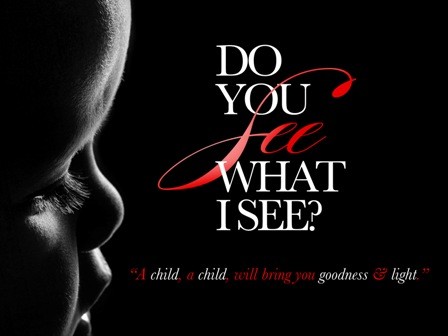 Do you see a tiny, little, helpless baby that would grow up to be a great Prophet? Yes! Ameen! But do also see that little baby growing up to be the Savior of the world – sent by God – for sinners?

The first Christmas: the Bible & the Qur’an both say His name shall be called “Jesus.”

The Bible says it is because we need a Savior.

Postscript: when Jesus was born in Bethlehem in what is now the West Bank of Palestine, there were no churches or mosques – unlike the picture above. But I chose that beautiful picture because the Bible says Jesus came as the Savior for all our sins – Jews, Christians, Muslims. . .everyone.