Isa (Jesus) Wept On The First “Palm Sunday.” Does He Still Weep Now. . .In Paradise?

Isa (Jesus) Wept On The First “Palm Sunday.” Does He Still Weep Now. . .In Paradise?

All my Muslim friends say something that may surprise my Christian readers: they all say that they love Jesus. Personally, I think this can result in something beautiful. Instead of arguing over who owns Jesus, I think that the topic of loving Jesus can create a tremendous conversation that Muslims and Christians can engage in. We can ask each other the questions:

“Why do you love Jesus?”
“What is it about him that you love?”

I love my wife – not just because she is my wife – but because of specific attributes that she has. She is faithful, persevering, honest, supportive, kind, wise, discerning, deep, thoughtful, caring, an excellent listener and – on the lighter side – she watches football and basketball with me (I could list many more positive traits)!

In the same way, I love Jesus because of specific attributes that he displayed when he walked the land of Palestine over 2000 years ago. He was the epitome of love, honesty, justice, wisdom, self-control, courage, mercy, grace, patience, righteous anger, and faithfulness to God (again, I could continue).

There is part of a story of Jesus that moves me deeply but is little known by many. It typifies one of the many reasons why I love him. It happened at the beginning of the time Christians around the world are celebrating right now called “Holy Week.” The event I am referring to happened on what is traditionally called “Palm Sunday” – the day that Jesus approached Jerusalem from the Mount of Olives and was wildly celebrated by the masses as the long-promised, long-awaited messiah: the savior of the Jews. As Jesus descended that slope toward the city, most people were delirious with joy, a few people were angry (the jealous religious leaders), and one person – Jesus – wept. The Gospels – or Injeel – say that “as he approached Jerusalem and saw the city, he wept over it” (Luke 19:41). 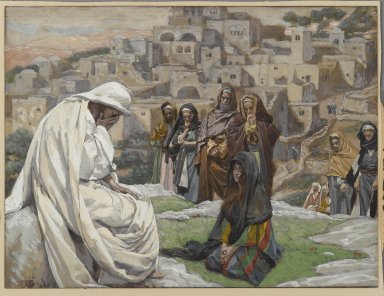 In that moment, Jesus saw so clearly that the people of Jerusalem would reject him and the salvation he came to bring. But it was not any kind of personal rejection that made him weep. He had far too much inner strength and understanding of his identity for that. No, he saw the terrible agony and future destruction that would come to the people of Jerusalem due to their rejection of him and his mission and that brought him to tears.

I love Jesus because out of his compassion he wept for people:

Lost people.
Doomed people.
Even wicked people who would reject him and curse him and hate him.

What kind of love was this?

While we as Christians and Muslims disagree on how Jesus got to Paradise (a topic for another day), we all agree that he is there. I wonder if in Paradise right now, Jesus is looking over our world and weeping for people who are headed for the unspeakable wrath of God’s final judgment – just as he did on that day in Palestine 2000 years ago. . .

(Postscript: dear friends, I write this blog for only one reason. I want as many people as possible to be in Paradise! Jesus paid the price for you to be there. He gave up everything – his very life – for you. No amount of good deeds can pay for your many sins. No amount of praying, fasting, giving, or going can erase the stain of your bad deeds. But, one thing can. The sacrifice of Jesus. If you want to talk about this, please reply to this blog post or send me a private message at InTheHarvest@gmail.com. We can talk together with mutual respect, honesty, and love.)