(this is a repost of a previous blog post)

A friend and I had another excellent conversation about the Qur’an and the Bible last week with one of our wonderful Muslim friends. The great thing about our conversations is that we can be honest with each other about what we believe but also remain good friends. When we part ways, we shake hands, hug each other, and still really care about each other. This two hour conversation was no different.

Last week during our conversation, our Muslim friend said something that he says often, “God would never send one of his prophets and allow them to be killed!” He added with great emotion in his voice, “It doesn’t make sense!” He said that if he – as a man – sent someone to another country as his representative, he would always protect them and not let anything happen to them. How much more, by this reasoning, would God protect Jesus as His messenger.

Those words keep ringing in my ears.

Listen to what God says through his prophet, Isaiah: 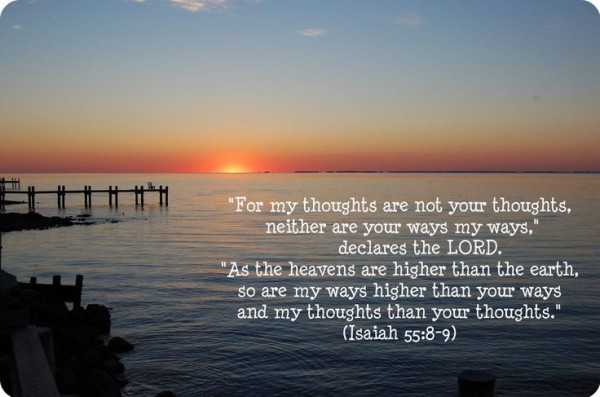 I think we need to careful when we talk about God and His actions that don’t seem to make sense to our little, finite minds.

God is King. Malek. He cannot be limited.

God can do anything. . .anything He wants.

And if He wants to do something so wonderful, so amazing, so loving, and yes, something that doesn’t makes sense to us – like sending His prophet Jesus to die for us – who are we to say, “It doesn’t make sense!”